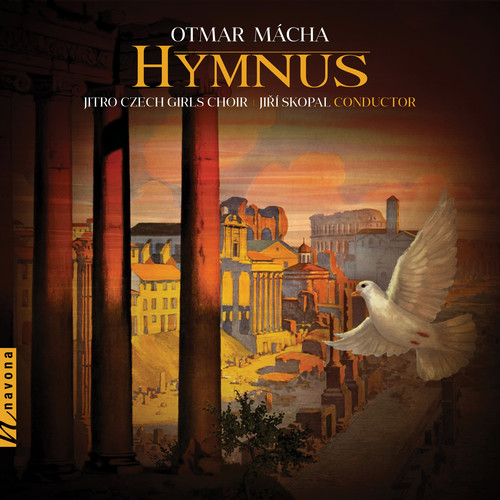 On Hymnus, the world renowned Jitro Czech Girls Choir under the direction of Jiri Skopal once again delivers refined, dazzling interpretations of the music that is so much a part of Czech culture. The album, which is the Choir's third release on Navona Records, includes 24 selections that range from Moravian and Silesian folk songs on which the Choir interprets the subtle call and response between bucolic lovers, to a series of compositions inspired by Latin proverbs on which intricate, multidimensional vocals underscore the significance of a simple word or phrase. While the album's tracks are assembled under specific groupings - Silesian Yodel Songs, The Replies of Silesian Songs, Moravian Folk Songs, and Proverbia - this merely delineates the source material. The unifying impact of the Choir's exquisitely crafted vocals elevates this album far above what might otherwise be an ethnomusicological exercise. For the most part, the choir performs without any instrumental accompaniment, save for several Moravian folk songs, on which a solo piano provides an additional layer of intricacy, and for the album's closing track, Hymnus. Combining the stirring instrumentation of kettledrum and organ with the Choir's uplifting vocals, Hymnus translates the positive, humanistic vision of John Amos Comenius, the 17th century educator, philosopher and theologian, into what serves as a superb melodious conclusion of this impressive recording. The Jitro Czech Girls Choir is a complex institution with a membership of around 350 young singers ranging between five and 19 years of age. Since being founded 35 years ago, the Choir has been lauded internationally for it's tonal brilliance, superb intonation, and distinctive rich blend of sound and energetic vitality. It is considered as one of the best children's choirs anywhere in the world, receiving multiple awards and medals.