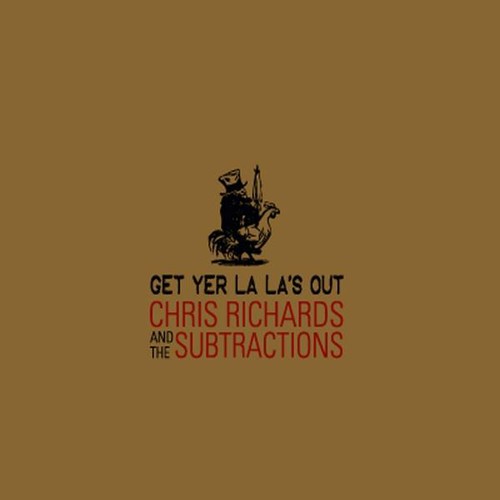 Detroit power pop trio Chris Richards and the Subtractions will release their latest full-length Get Yer La La's Out on Gangplank Records on May 29th. Produced by Gangplank-founder David Feeny at his own Tempermill Studios just outside of Detroit, the album contains 10 songs of hook-laden, melody-intensive pop confection (The vinyl version of La La's will feature an additional track- a cover of Dogs by the Who and will be released in mid June). The press has been rolling in... 'Get Yer La La's Out rocks harder than it's predecessor; this is still a pop album first and foremost, but the punch of the performances and the bark of these melodies is tougher, and clocking in at just under half-an-hour, this album makes a virtue of concision, delivering ten portions of high-energy guitar-centric bliss with spirit and panache, and then clearing out before they can be accused of wearing out their welcome. Simply said, Chris Richards & the Subtractions have made two top-notch albums in a row' All Music Guide 3 1/2 stars 'Chris Richards And The Subtractions new record - Get Yer La La's Out - is chock full of the tasty hooks and melody you've come to expect from this Detroit trio. It's no surprise that the songs are great and served up on top of a thick bed of jangly-but-edgy guitars and the harmonies are all sweet and "oooooh"-ey. What is surprising, though, is that they've actually one-upped their last effort - 2009's brilliant Sad Sounds of the Summer' Motor City Rocks 'The Subtractions new record is a stunning display of power pop dynamics, the kind of record that never let's up, one churning popper after another like Meyerman or The Turnback' Pop Geek Heaven - 4 1/2 stars 'Chris Richards is one of the Midwest's finest power pop stars and he continues to dazzle us on Get Yer La La's Out. Both veterans, bassist Todd Holmes and drummer Larry Grodsky join in the fun. On the opener "Don't Do Anything Tonight" is rich in jangling rhythm, driving melody full of memorable hooks. Fans of REM, Tommy Keene, Sloan and Teenage Fanclub will gleefully soak it all in' Powerpopaholic - 9 out of 10 stars 'Get Yer La La's Out is the slightly more assertive yin to Sad Sounds' brighter, goes-down-easy yang. With ten (or eleven if you take the vinyl route) short but sweet nuggets, Richards proves once again he's a thoughtful steward of quality control. This time out, the band have created an album that's just as much Buffalo Tom and Dillon Fence as it is Matthew Sweet and Velvet Crush. La La's... is guitar pop perfection on a stick, without any of the cotton candy fluff' Wilfully Obscure In addition to singer/songwriter Chris Richards, the Subtractions feature a powerful rhythm section in bass player Todd Holmes and drummer Larry Grodsky who have been fixtures on the Detroit scene since their time in 80's and 90's outfits Hippodrome and The Pantookas. Richards' love of power pop, which combines an affection for the music of the British Invasion along with 90's bands such as Teenage Fanclub and The Velvet Crush, is reflected in their guitar-driven approach. The Subtractions last record, Sad Sounds of the Summer, received glowing reviews from The All Music Guide and a sundry of Power Pop leaning publications as well as countless "Best Of" lists in 2009- including - David Bash Best of 2009 List, John Borack's Best of 2009, #3 on the overall Best of the Year Audities List, Beat the Indie Drum-Essential Albums of 2009, Not Lame/Bruce Brodeen- Best of 2009, Pop Chef (Spain), Power Pop Station (Brazil), Power Pop Review (UK), Absolute Power Pop and Power Popaholic. Richards' 2004 Mystery Spot was voted as one of the "Best of the Decade" by Power Pop Action (Spain). The band's sound also has global appeal, thanks to power pop's enduring popularity far beyond it's British and American shores. According to Richards, "I've been fortunate to have my records released and do well in Spain, Sweden, Japan, and Australia and both the press and fan reaction have been amazing. It's a challenge trying to let fans in multiple countries know we've got a record out, but there's such a great network of the genre's fans out there that word just seems to spread." The recording of Get Yer La La's Out took place over multiple sessions in late 2011 at Detroit's Tempermill Studios, produced and mixed by Tempermill owner and multi-instrumentalist David Feeny (Blanche, American Mars).
back to top