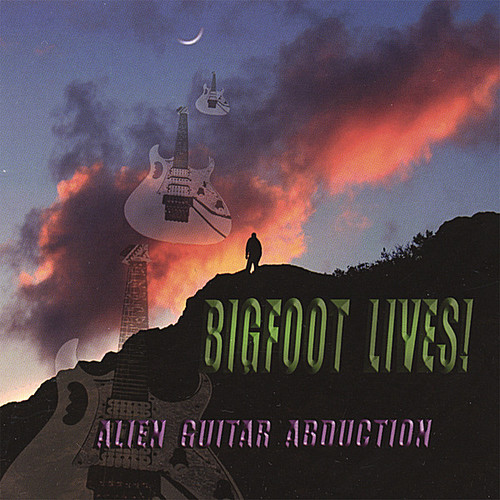 Stan Rose has been a guitarist for over 20 years. He began playing while living on Long Island, New York, and was heavily influenced by local guitar heroes Joe Satriani and Steve Vai, although his first guitar influence was David Evans, The Edge of U2. Other big influences include: John Petrucci, Danny Gatton, Eric Johnson, Tony MacAlpine, Steve Howe, Ochieng Kabasellah, Shawn Lane, Stanley Jordan, Martin Simpson, and Steve Morse, among many others. Stan has taken master classes with acoustic legend Martin Simpson, and classical guitar lessons at SUNY Stony Brook with a student of John Williams. He attended the last public Master's class of Andre Segovia. He also took lessons with John Petrucci of Dream Theatre (when John was living in an apartment the size of a closet). He currently lives in Pueblo, Colorado. Bigfoot Lives! Is the second CD released by Alien Guitar Abduction. This CD represents a departure from the first CD 'Eureka!!' which was entirely guitar with no synthesized sounds. In the new CD, the Axon MKII guitar synthesizer is used to create a variety of sounds, including keyboards, bass, and even drums. But all of the sounds are straight from the fingers on the strings. The amazing versatility and tracking accuracy of the Axon make it possible to be highly creative using the guitar as sole instrument. On Bigfoot Lives!, an attempt is made to blend elements of classical or acoustic guitar styles with neoclassical metal styles (shred) and traditional blues and jazz. The Axon is also used to add a techno element. This is Alien Guitar Abduction's vision of the future of guitar.