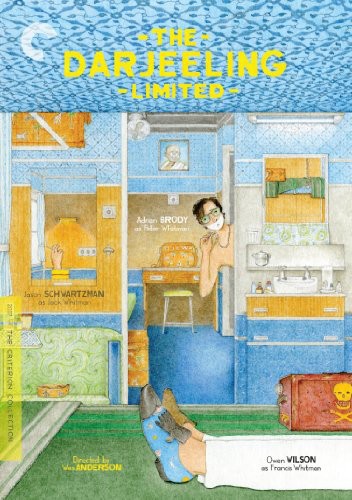 In THE DARJEELING LIMITED, from director Wes Anderson (Rushmore, Fantastic Mr. Fox), three estranged American brothers reunite for a meticulously planned, soul-searching train voyage across India, one year after the death of their father. For reasons involving over-the-counter painkillers, Indian cough syrup, and pepper spray, the brothers eventually find themselves stranded alone in the middle of the desert—where a new, unplanned chapter of their journey begins. Featuring a sensational cast, including Owen Wilson (Armageddon, Wedding Crashers), Adrien Brody (The Thin Red Line, The Pianist), Jason Schwartzman (Rushmore, HBO’s Bored to Death), and Anjelica Huston (Prizzi’s Honor, The Grifters), THE DARJEELING LIMITED is a visually dazzling and hilarious film that takes Anderson’s work to richer, deeper places than ever before.

In this Criterion Collection release, The Darjeeling Limited is loaded with extras, from those that add conceptual heft to those more game-like, providing links to click and play with while sifting through material. Disc 1 offers a complete version of the 15-minute short film "Hotel Chevalier," starring the same protagonist, Jack (Jason Schwartzman), as The Darjeeling Limited. This is called a "short story" and an "introduction to the feature" by Wes Anderson in his audio commentary. "Hotel Chevalier," starring Jack and his thorny lover, portrayed by Natalie Portman, is meant to be viewed before Darjeeling Limited's opening sequence, in which Bill Murray rushes to catch a train he isn't destined to ride on. In the short film, clues about contents of the brothers' luggage in the feature are answered, but more importantly it gives the viewer access into Anderson's creative mind, fertilizing one character idea that he admittedly rolled into a larger script. Disc 2 offers some jaunty excursions, like an American Express commercial mocking the notion of the big personality, in this case Anderson's director persona, whipping out his credit card for grand expenditures. One sees Anderson's real "Trophy Case" and other personal snippets in a section called "Wari's Diary," a series of icons that open up to journalistic reminiscences about filming in India. In this, one sees animals the film crew saw, and a hilarious "Special Effects" link shows a bunch of men running past a still train car's windows with palm tree fronds to simulate a moving train on camera. A short film by Roman Coppola also adds to the travel-diary feel of this extras disc. The meatiest inclusion here is the 30-minute "Making of the Darjeeling Limited" by Barry Braverman, which chronicles some of the at-times humorous challenges the crew faced filming in India. "Conversation with James Ivory," a filmed interview between James Ivory and Wes Anderson, is fascinating, as it charts a history of Indian cinema and its soundtracks that both directors admire. Through this Criterion treatment, one will come away understanding Anderson's working environment and his inspirations both at large and specific to this film, and will get to know a bit about his creative process through seeing how his short films are seedlings for larger ideas. Great stuff.