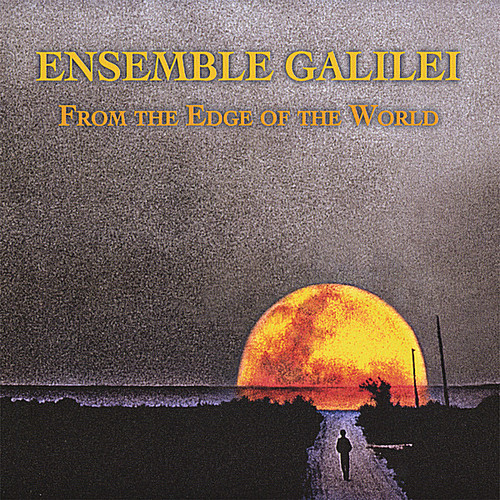 From The Edge Of The World
Artist: Ensemble Galilei
Format: CD
New: Not in stock
Wish

Journeys take all forms. Two years ago we began a journey to develop a show with the National Geographic Society's blessing and support, called " First Person- Stories From the Edge of the World". It involved readings of poetry and diaries of explorers from several centuries and around the world. This was accompanied by photographs from the NGS archives, and music to make it all come together. Here, we present the music: some Celtic, some Scandinavian, some early, and a few tunes that we wrote ourselves. Recorded in early 2007, Hanneke Cassel has joined us as fiddler extrordinaire, and Allison Edberg plays violin and viola on the early music. Kathryn Montoya plays recorders, pennywhistle, and baroque oboe, Carolyn Anderson Surrick plays viola da gamba, and Sue Richards plays the Celtic harp. Glen Velez joined us on percussion, and Jackie Moran played the Irish bodhran. The music includes some wild Scottish strathspeys and reels, exquisite string trios, an Irish air, a great waltz for Sue's daughter, some killer Swedish tunes, and some tunes we wrote with specific stories in mind, but that stand alone as just great tunes. We each took a solo or lead, so each instrument can be heard on it's own as well as in ensemble. Based in Annapolis, Maryland, the group has recorded nine CDs, has been interviewed on NPR's Performance Today, All Things Considered, Talk of the Nation, and the Diane Rehm Show and has toured this country, Mexico and Canada. They have performed with Scottish singer Jean Redpath, XM Radio's Robert Aubry Davis, and regularly tour with NPR's Neal Conan who is their resident narrator for "A Universe of Dreams." "First Person" had it's debut in April of 2007, with Neal Conan, Liane Hanson, and actor Bill Pullman narrating.