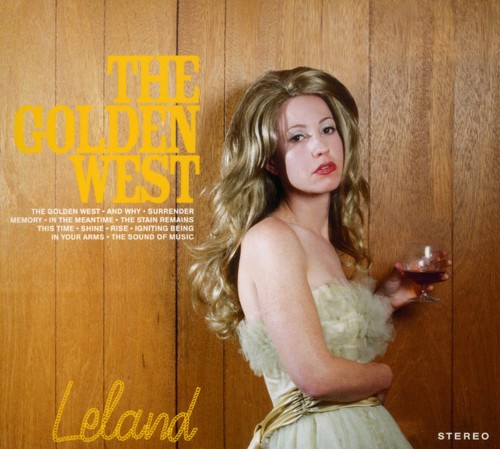 Singer songwriter Leland's sophomore effort the Golden West released in 2007 on Rubia Records is an expansion of the sound she created for her 2004 debut release Forever. This time around the lush instrumentation and haunting infectious melodies have been rendered in a much more robust rock production. The basic tracks for this entire album were recorded live with a full band over the course of a few days lending an intense, rhythmic, and energized quality to these well crated avant pop songs. Each song is an epic experience with a build up, crescendo, and magnificent outro section infused with layered vocal and instrumental harmonies. Like the songs on her debut Forever they are songs with a familiar romantic nostalgic tone steeped in the late 1960s and early 1970s and yet are unmistakably now. They are songs describing romantic disappointment, loneliness, spiritual awakening, the rejuvenating power of nature, and the redemption of Love. The Golden West is a musical odyssey that begins with the solitary acoustic guitar of the title track taking the listener on a desolate journey of lost love in the Old West. The next ten successive tracks bathe the listener in lush orchestration, musical movements, crescendos and vocal harmonies until finally we arrive at the final pristine vocal and acoustic guitar track of the Sound of Music which sparely bookends the listening journey carefully constructed by Leland and her producer collaborator Marc Doten. Many talented musicians came together for the recording of The Golden West. From strings to horns to piano and guitars, all of the instrumentation is real and there was no click track used in the entire recording process lending the recording an organic classic feeling. As a performer Leland draws upon her background as a visual and performance artist creating an ever-changing visual image through the art of costume and persona. As a visual artist she creates images that resemble film stills with her photographic partner, Leeza Davidson (see Leezalee.com). In these images the artists explore female archetypes that through the filter of nostalgia convey various facets of popular culture's collective female psyche. Leland occupies many of these characters on stage when she shares her songs, steeping the lush arrangements of the album in an extra layer of visual theatricality. The Golden West is a musical and creative triumph, taking the sensitivity and intimacy of the tracks of Forever and projecting this energy into more universally accessible songs and stellar production.