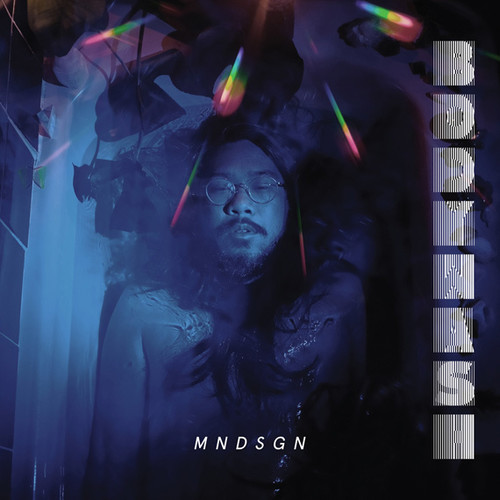 Mndsgn (born Ringgo Ancheta) grew up in south New Jersey, raised with Gospel music at church, and B-Boy culture at home. Experimenting with beat-making, he befriended fellow producer Knxwledge and the two formed the influential Klipmode collective (along with Devonwho and Suzi Analogue). Mndsgn's music flourished when he moved to Los Angeles, catching the attention of Stones Throw who released Yawn Zen (2014), an LP of introspective and mostly instrumental beat creations, punctuated by vocal cuts. Body Wash is his second album for Stones Throw, a full set of realized songs that were only hinted at on Yawn Zen. Influences here include the likes of early SOLAR records material, Leon Sylvers III, Kashif, and Dave Grusin. These artists, Mndsgn says, "embodied that potent feeling in the early 80s boogie/funk/soul/jazz/fusion wave." He adds, "I was also digging back into some early 90s R&B sounds and started really imagining what it would be like if I had mashed the two eras together." He explains Body Wash as "a soul record that plays with nostalgic elements in a very dynamic & positive way. Think about it as a box of crayons for you to draw emotions with." The album was built around a backstory, a loose narrative thread through which he could filter his unformed ideas. In the narrative, a homeless man encounters a mysterious woman who gives him shelter. She instructs him to bathe with a very peculiar body wash. As he soaks and sinks deeper in a thick lather of this unknown solution, the man finds himself transported to an alternate dimension. Mndsgn describes the story as a vessel "that would allow me to speak on topics that were universally relatable... The story actually became a true outlet for me to address worldly issues with Self." The resulting album also represents a dynamic step forward in songwriting. Without explicitly relating it's plot or characters, the album as a whole turns on the story's key theme, the psychedelic, transformative power of love.