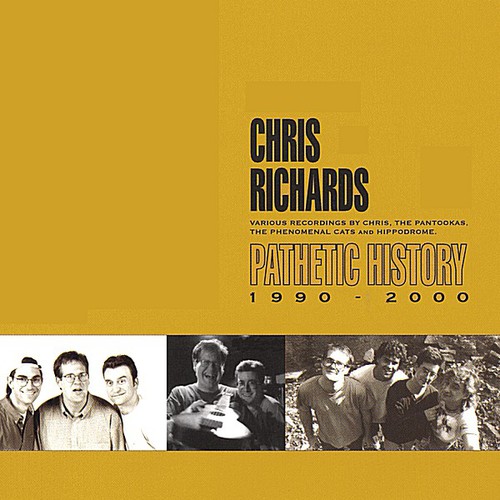 Take note indie power pop fans: You really need this. 17 pop wonders wrapped in one package of songs that needed to find a home. Well, this is a mansion of happy, sunny and bright pop melodies, chippy guitar sounds and snappy vocals. Richards' bands in the past 10 years include the excellent The Pantookas, The Phenomenal Cats and Hippodrome. Fans of Tommy Keene, The Mockers, Spongetones will not miss a beat here, only savor them. 'The songs are tightly structured, the arrangements modest but compelling, with swooping ooh-ahh harmonies and front-mixed guitars touched with enough grit to buttress the sunshiny pop'-Sound Judgement. This one of those 'can't miss' items for a majority of anyone reading this far---no brainer, Extremely Highly Recommended. Not Lame Records If you're a sucker for bouncy pop songs with great hooks, clear vocals, uplifting harmonies and catchy tunes, then this album is a must-have for your collection. The songwriting is first rate and the production neat and spot-on. Chris Richards has apparently been in a number of bands, and wrote and recorded a hefty number of tunes, collected on Pathetic History, which serves as his first full-length release. The tracks are credited to the various groups Richards has helmed over the years, including the Phenomenal Cats, the Pantooks and Hippidrome, as well as under his solo moniker. The collection brings together previously unreleased tracks, alternate mixes, reissues, outtakes, demos and a couple of new treats to form a wonderful overview of the career to date of a very talented artist who should have received kudos from the press and public long before now. Where has he been hiding? The astoundingly strong 17 cuts on the CD showcase a distinctive talent that can fill an album more easily than some of the current chart-topping acts whose CDs contain a mere eight or nine weak tracks. Every song is a gem, suitable for personal headphone listening or blasting on a primo sound system. You can sing along after a few short repeated listens because the melodies will instantly burn themselves into your mind and the words tell easy-to-remember stories. Richards sings about winning the girl despite competition from Superman ('Superman II') and about a mystery girl he pursues ('Gabrielle'). He also croons an ode to his infant daughter ('Greatest Lullaby') and pays homage to his self-proclaimed excessive drinking ('Ball'). This is the perfect album for fans of pure pop who eschew the dribble as spewed forth by homogenized and prefabricated teen idols. Chris Richards deserves fame and fortune, platinum CD sales and tons of glowing press reviews. Pathetic History will undoubtedly give you hours of pleasure that grows more enjoyable with every repeated playing. Judee Gould [buy it] For fans of: the British invasion bands of the 1960s, the Nazz, the Raspberries High Bias Power pop is about hooks. And power. Not to mention a little bit of soul. For all of his ten-year musical career captured on this record, Chris Richards has been laying down powerful hook after hook with as much soul as a suburban kid from MI could be expected to have. Richards is a power pop classicist: Beatlesque melodies, Raspberries-style guitar crunch, heartfelt lyrics about love lost and found, and beautiful vocal harmony. You can file him right alongside other modern pop classicists like Matthew Sweet or Velvet Crush or Mayflies USA and feel good about it. Pathetic History covers songs by three different bands Richards formed and throws in a few solo tracks as well. Hippodrome, from the early '90s, is represented by two tracks. They are pretty straightforward rockers with lots of guitar. The three solo tracks from the mid-'90s are in much the same vein with a poppier feeling and a fuller sound. Nice, but what really makes this CD the gem it is are the tracks by Richards' bands from the late '90s, The Phenomenal Cats (cool Kinks reference) and the Pantookas. Richards began to expand his sound, using piano to great effect and throwing in horns, strings, and more heavenly backing-vocal harmonies. Tracks like 'Greatest Lullaby,' with it's rollicking piano and 'Maybe I Need You,' with it's bongo and piano chorus, call to mind a modern day Left Banke. The Phenomenal Cats even cover the Left Banke's classic 'I've Got Something on My Mind' and do quite a credible job. The two standout tracks are the Pantookas' 'I Need a Heart,' an electric piano-driven song built around what else but incredible vocal harmonies. By the time the second chorus rolls around, you'll be singing along. It's that catchy. 'Holiday' is a solo demo from 2000 that Richards says is inspired by his love of Jason Falkner's music. The tight chord progressions and yearning vocals do bring Falkner to mind; it is a great Little Rock song. Chris Richards is an undiscovered talent. If you like classic pop music, power or otherwise, you should discover him. Simple as that. 4 1/2 stars All Music Guide.
This website uses cookies to personalize content and analyse traffic in order to offer you a better experience.
I accept Learn More
back to top