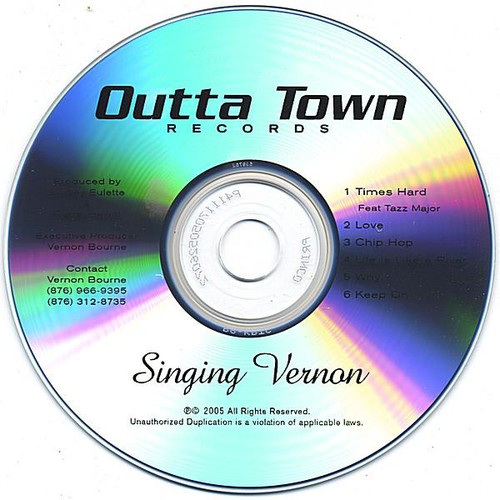 Vernon Bourne "Singing Vernon" grew up in a small town called Santa Cruz, in the parish of St. Elizabeth, Jamaica W. I. I attended the Santa Cruz All Age School, then St. Elizabeth Technical High School. At the age of ten, he started singing in his class choir, where he learned to appreciate harmonies. His father and uncle were musicians in the 50's and 60's, playing Mento, Calypso and Blues music. They played in a bands called 'Red Hot Six' or 'Collegate Band', based in Santa Cruz, St. Elizabeth. His family on a whole is very much music oriented. He started recognizing his ability to sing, spinning and singing with the records on his cousin's dance hall sound system in the 1980's named 'Sal Soul Disco'. 'I was more compelled to make music when I met Dudley Eulitt, a musician, composer and now co-producer,' explains Vernon. In 2004 he sang his first song called 'Times Hard' with Tazz Major, who encouraged him to work with him as a duo in the song. During that time he did two other songs entitled 'Chip Hop' and 'Love Is A Hurting Thing.' Singing Vernon really took the business seriously, when he did 'Life Is Like A River.' He then started getting more rotations on the Jamaica radio stations, then he followed up with 'Why ' and 'Keep On' which inspired him to complete this offering of 12 wonderful tracks for you to enjoy. For VERNON BOURNE 'SINGING VERNON'