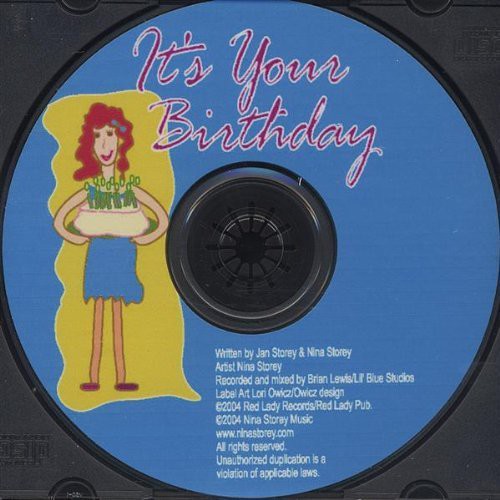 It's Your Birthday
Artist: Nina Storey
Format: CD
New: Not in stock
Wish

Nina Storey Singer/songwriter from Boulder, Colorado, Nina Storey, blends an eclectic sound of blues, rock, funk and pop. She has been compared to a diverse group of artists such as Janis Joplin, Chaka Kahn, Tori Amos, Whitney Houston and Billie Holiday. Nina has just released a new live CD entitled, '24 Off The Board' which showcases Nina's raw, intimate and explosive voice, as well as her catchy melodic yet thought provoking lyrics and music. She has independently written, recorded and released five CDs; 'Guilt and Honey', 'Bootleg', 'Shades', 'Nina Storey' and ' 24 Off The Board.' Both 'Shades' and 'Nina Storey' were released to national and critical acclaim, and have received extensive radio airplay throughout the country on mainstream, Triple A, independent and college radio stations. It can be heard in all of Nina's work; her voice is mesmerizing and her music is touching, funny, candid, poetic, and always passionate. She has been featured on CNN Showbiz Today, MTV Online, and Rolling Stone Online. In addition, she has received rave reviews in publications such as; People Magazine, Billboard Magazine, Performing Songwriter, Music Connection, Totally Adult and several of Colorado's top magazines including Westword and 5280 Magazine, who have named her vocalist and songwriter of the year. Nina's live performance is as riveting as it is honest, as she brings the listener with her on her journey of sound, and emotion. She has opened for and toured with such captivating artists as Etta James, Earth Wind and Fire, Keb Mo', Jonny Lang, Joan Osborne, and John Lee Hooker. Her performance is equally moving in both larger and smaller venues as was heard in The Lilith Fair, Woodstock '99, The Montreal International Jazz Festival, The Monterey Blues Festival, The New Orleans Jazz Festival, and Red Rocks Amphitheater; as well as her solo piano acoustic performances at The High Sierra Festival, or on the live performance TV series, 'Spotlight on Performing Songwriter.' She has also had unforgettable performances singing with the Colorado Symphony at Fiddler's Green Amphitheater, and singing the National Anthem for numerous sports teams around the country, including the Chicago Bulls, the Colorado Avalanche, and the Denver Broncos at Invesco Field at Mile High for the AFC Championship. Her songs have been featured in both film and television. 'If I Were An Angel' was featured on ABC's hit TV show, 'Alias.' 'Left' was featured in 'Broken Heart's Club' (Sony Pictures), and four songs from 'Shades' were featured in the film, 'Public/Private' (North Sea Films). Nina can also be seen in concert from coast to coast, on Frontier Airlines new in-flight channel, 'Wild Blue Yonder.' In July 2004, Jazziz Magazine will feature Nina, and her new single, 'All the Little Things', on their new compilation CD. Nina has also been selected to endorse Klipsch Audio as they have said, 'the passion this emerging singer songwriter displays...proves she's a true original.' Nina's presence on stage and on record is truly unforgettable. Her voice is powerful, yet intimate and sultry. And while her music is diverse, it is always connected. This is why Nina's eclectic soulful style is one that identifies her as a genuine talent like no other.