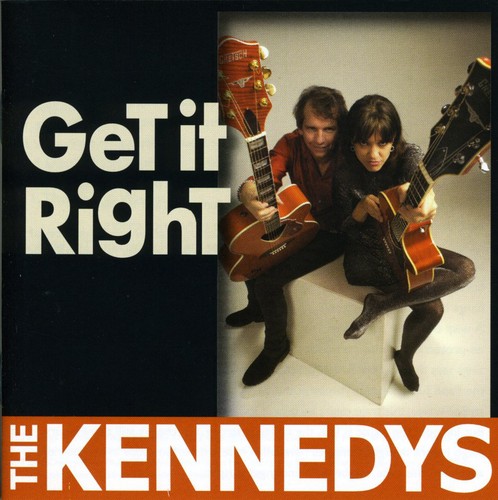 Get It Right
Artist: Kennedys
Format: CD
New: Not in stock
Wish

Pete and Maura Kennedy met at the Continental Club in Austin Texas. In the dark confines of this roots rock sanctuary, they hit it off immediately. Within twenty four hours, they had written their first song, 'Day In and Day Out.' Pete was playing lead guitar with Nanci Griffith, and he left town for a gig in Telluride, Colorado, a thousand miles northwest of Austin. After the show, they spoke on the phone and agreed to meet at the equidistant point: Lubbock, Texas. They each drove five hundred miles to celebrate their first date at Buddy Holly's grave, in the windy west Texan cotton town. There was more cause for celebration when Maura joined Ms. Griffith's band and they set out on an extended tour of the British Isles, opening shows all over England, Ireland, and Scotland. In a dusty little dressing room on the top floor of Dublin's Olympia theatre, they penned the songs that would become their first CD, 'River of Fallen Stars.' The CD was awarded the 'Indie' award in 1995 for 'Best Adult Contemporary CD' by the National Association of Independent Record Distributors. In 1995, the duo hit the road to record their second CD, the ambitious 'Life is Large,' which wove their talents with those of guests Steve Earle, Kelly Willis, Nils Lofgrin, Roger McGuinn, and the Dixie Hummingbirds. They were nominated once again for the NAIRD Indie award, and the title track became their signature song. Their third CD, 'Angel Fire,' was a largely acoustic, lyric driven collection. The following CD, 'Evolver,' was a big, rocking set that included the power pop 'Pick You Up.' In 2001, they released 'Positively Live!' a live album that captured the blistering guitar jams and rocking vibe that set them apart from other acoustic acts. On thier 2002 release, 'Get It Right,' The Kennedys hang out at the intersection of folk, pop, and soul, and some of the cuts even push the limits of those free-ranging categories. 'Didn't it Rain' is a concoction of gospel, old-timey and blues set to an insistant drum 'n' bass loop. 'The Things We Touch' could be an Ibiza ambient chill-out track, and 'Galaxy Express' sounds like Sergio Mendes and Claudine Longet meeting for cocktails at Serge Gainsbourgh's pad. Ultimately, Pete and Maura's sound is based on rootsy guitar pop, so it's appropriate that they first met in Austin, and honed their chops on the road with folk/pop legend Nanci Griffith. (They performed on her Grammy'winning Other Voices, Other Rooms, volumes one and two, on Elektra Records) The Griffith connection is still fresh. In fact, she appears twice on GET IT RIGHT, as co-writer with Maura on 'Pearl's Eye View,' and as guest vocalist on 'Ride Angel Ride,' the opening track that kicks off the CD with a shimmering explosion of Rickenbackers and harmonies. What ties the Kennedys myriad influences together is their knack for hooky melodies, lyricism, and the kind of fresh vocal harmonies that people are turning to these days in search of a positive vibe. Yeah, they're married. Yeah, they like to have fun, and most importantly, they sing it straight from the heart. The 'Get It Right' CD is enhanced with visual elements including photos, lyrics, liner notes, links to The Kennedys' Web site, and a full-length version of their award-winning, self-directed video for Nickeltown. The release of the CD will coincide with the publication of their first book, a survival manual for music video makers that chronicles, in journal form, some of the wondrous and wild times on their endless road trip. (They're known not only as a harmonizing duo, but also as collectors of vintage clothes, as independent record and video producers, and as the authors of a newly published book on music video.) So the Kennedys are about music and a little bit more. They're comfortable in a variety of styles ranging from roots rock to ambient etheria, and they write books and produce videos when they're not igniting incendiary Gretsch jams, but ultimately it's their chemistry, their love for each other, and their unashamedly idealistic pop vision that has carved them their own niche onstage and in the world of maverick radio.