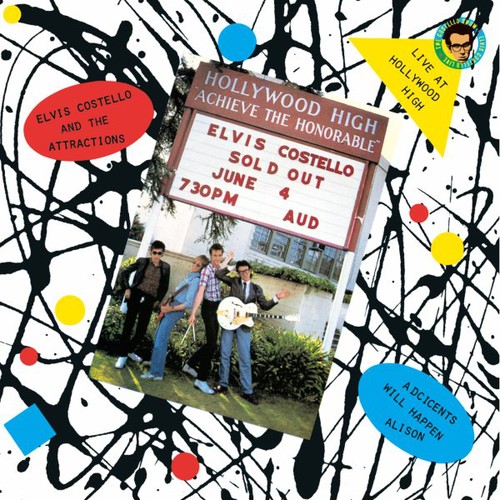 First time on CD for this historic 1978 performance, the second installment in The Costello Show live performance series. Features 20 tracks, 11 of them previously unreleased. Elvis Costello was 23 years old when he performed a sold-out concert at the epicenter of the entertainment universe: the auditorium at Hollywood High School. It was June 4, 1978 and he had been introduced to America with a controversial appearance on Saturday Night Live. Just three months prior to this Hollywood High concert, This Year's Model had become his second album but first as Elvis Costello And The Attractions, with the singer/songwriter joined by keyboardist Steve Nieve, bassist Bruce Thomas and drummer Pete Thomas. Producing the concert would be Nick Lowe, who would helm Costello's first five albums.

''Live at Hollywood High'' (officially released as ''Live at Hollywood High/The Costello Show Vol. 2'') is a recording by Elvis Costello and the Attractions from a 1978 concert at Hollywood High School in Los Angeles, California. Three songs from the concert were originally included as a bonus 7" vinyl EP that sold with initial pressings of the ''Armed Forces'' album in 1979. A 2002 re-issue of ''Armed Forces'' added six tracks to the three from the EP (for a total of nine tracks) and placed them in proper running order. In 2010, the Hip-O Select label released a full version of ''Live At Hollywood High'' with all 20 tracks from the concert on one CD.

*El Mocambo (Toronto, Ontario), recorded on March 6, 1978, which was released by CBS as a promotional LP in Canada and re-released in 1993 as one of four CD's on the ''2½ Years'' box set. It was later given a stand alone release as ''The Costello Show: Live at the El Mocambo'' in 2009. The original vinyl LP and CD re-releases of this concert all contain the same songs. - Wikipedia