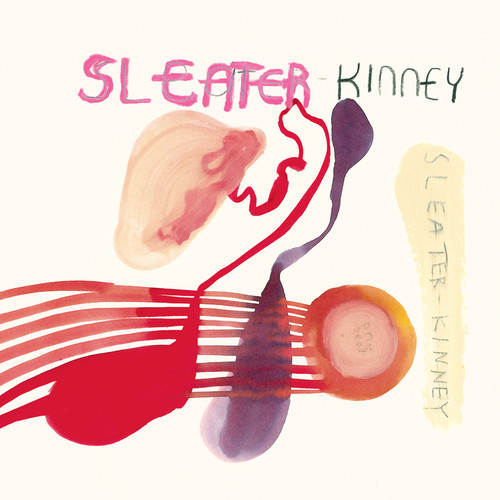 Having consolidated their strengths with All Hands on the Bad One, Sleater-Kinney revived the ambition of The Hot Rock on their sixth album, One Beat. John Goodmanson gives the group its cleanest-sounding production to date, which brings out all the new trappings in the ever more sophisticated arrangements. "Step Aside" boasts trumpet and sax, "The Remainder" a string section, several tracks are colored with delightfully weird vintage synths (the sort favored by Brian Eno or Pere Ubu), and there's even a theremin on "Funeral Song." (Trivia: The playful "Prisstina" also features the first male vocals ever on a Sleater-Kinney album, courtesy of Hedwig & the Angry Inch mastermind Stephen Trask.) Lyrically, One Beat is haunted by September 11; "Faraway" and the cry of dissent "Combat Rock" are some of the strongest statements on the tragedy any artist has yet released, and the backdrop lends a new urgency to Corin Tucker's pleas for a better world for her new son, not to mention the personal catharsis of "O2." All of this makes One Beat a much more effective stab at maturity than the often-difficult The Hot Rock. True, the group does occasionally fall into the angularity that made The Hot Rock their least immediate effort, but One Beat offers more rewards upon repeated plays -- the more challenging tracks eventually do sink in. The album does have its minor drawbacks -- Carrie Brownstein's vocals can be a bit precious at times, and the pointed 9/11 observations make the occasional feminist sloganeering sound like nothing the group hasn't done better elsewhere. All of which is to say that if you've never understood the cultish adoration surrounding Sleater-Kinney, One Beat isn't likely to change your mind. But if you're already on board with their idiosyncrasies, One Beat is another triumph from a band that seems to produce them with startling regularity.