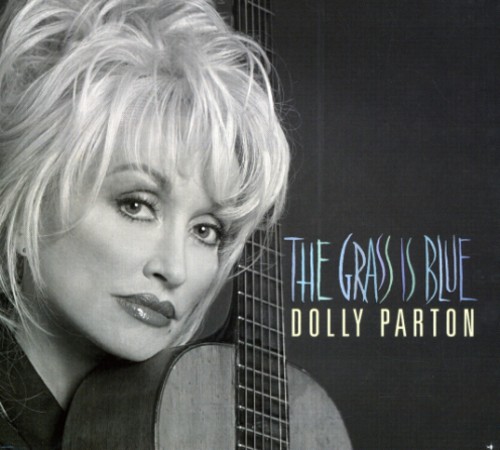 This is 100% unadulterated high lonesome stuff and surely Bill Monroe must be smiling somewhere. Smiling BIG. Dolly displays the full strength of her voice and is backed by one of the most powerufl bluegrass bands ever assemlbed. Yes you read right, Dolly does bluegrass. Yup, this is raw, unfiltered Bluegrass music with no drums anywhere. A must hear. Track list includes: "Travelin' Prayer," "Cash on the Barrelhead," "A Few Old Memories," "I'm gonna Sleep with One Eye Open," "Steady As the Rain," "I Still Miss Someone," "Endless Stream of Tears," "Silver Dagger," "Train, Train," "Will He Be Waiting," "The Grass Is Blue,' "I Am Ready"

''The Grass is Blue'' is a bluegrass album by Dolly Parton, released in October 1999 on the Sugar Hill label. It is her 37th studio album. In addition to rejuvenating Parton's then-lagging career, the album, along with the ''O Brother, Where Art Thou'' soundtrack and the work of Alison Krauss, is credited with making bluegrass a hugely popular musical genre during the early 2000s. Though the album received little airplay on mainstream country radio, it sold well (peaking at number 24 on the U.S. country albums charts), and was among the most critically acclaimed albums of Parton's career. The album was listed on many critics' year-end "best of" lists and won a 2001 Grammy Award for Best Bluegrass Album.

The songs included a mixture of Parton originals and folk and bluegrass standards, as well as a Billy Joel cover. "Silver Dagger", a late nineteenth century ballad, had been popularized by Joan Baez during the early 1960s. Norah Jones would later record the title song on a 2003 Parton tribute album. Parton had originally written "Steady as the Rain" for her younger sister Stella Parton, who had a top-forty country hit with the song in 1979.

There is an alternate cover which features Parton frowning and her guitar resting in a different position. - Wikipedia