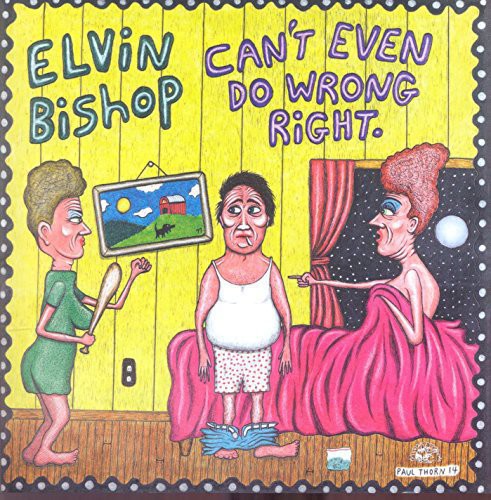 Legendary blues guitarist/songwriter/vocalist Elvin Bishop returns to Alligator Records with CAN'T EVEN DO WRONG RIGHT. With his ''so-loose-they're-tight'' road band behind him, along with friends Charlie Musselwhite and Mickey Thomas, Bishop has created one of the best albums of his career.

CAN'T EVEN DO WRONG RIGHT finds Bishop playing, writing and singing some of the most spirited and distinctive blues and roots music today. The CD proves that Bishop is as vital and creative an artist now as he was when he first hit the national scene in 1965 with The Paul Butterfield Blues Band. He is as slyly good-humored and instantly crowd-pleasing as he was when he was scoring Southern rock-styled hits during the 1970s. For five decades, he has never stopped touring or releasing instantly recognizable music featuring his groundbreaking playing, easygoing vocals, witty lyrics and good-time humor.

CAN'T EVEN DO WRONG RIGHT, with hilariously spot-on cover art by musician/artist Paul Thorn, finds Bishop firing on all cylinders and having fun while doing it. With this album, Bishop has created another highlight in a career that covers fifty years and over 20 albums. Five of the songs are Bishop originals, including ''Let Your Woman Have Her Way,'' on which Bishop's friend Mickey Thomas sings lead (this is the first time Thomas, the ex-Jefferson Starship singer, has recorded with Bishop since he provided vocals on Bishop's classic hit ''Fooled Around And Fell In Love''). An outstanding instrumental version of Jimmy Reed's ''Honest I Do'' harkens back to Elvin's childhood: this was the very first blues song he heard coming from Nashville's WLAC, the late night 50,000 watt powerhouse R&B radio station, beaming all the way to his Oklahoma home. In the 1950s in Oklahoma, everything was racially separated except the radio (''They couldn't segregate the airwaves,'' Bishop recalls). With the addition of his Grammy Award-winning pal Charlie Musselwhite on harmonica on ''Old School'' and ''No More Doggin ,'' CAN'T EVEN DO WRONG RIGHT hits its target at every turn.

As Bishop continues to tour and release new music, his stature continues to grow. Through the years his music has appeared in film and television, including the 1997 use of She Puts Me In The Mood (from his Alligator album Big Fun) in Quentin Tarantino's Jackie Brown. In 2005 he performed on the internationally televised Grammy Awards broadcast alongside Keith Urban, Tim McGraw, Gretchen Wilson, Lynyrd Skynyrd and Allman Brothers' guitarist Dickey Betts. He recently appeared in the documentary Born In Chicago. In 2012 and 2013 he was nominated for inclusion into the Rock And Roll Hall Of Fame as a member of The Paul Butterfield Blues Band.

Now, with CAN'T EVEN DO WRONG RIGHT, Bishop again is ready to share his happy-go-lucky vibe with his fans around the world. His triple-threat guitar/vocal/songwriting talent, along with his ability to deliver a rollicking good time wherever he goes, assures his not-to-be-missed live performances are consistently packed to the gills with cheering fans. The Chicago Tribune says Bishop plays ''good-time music guaranteed to put a smile on your face...serious playing, potent slide guitar and razor-sharp licks.''