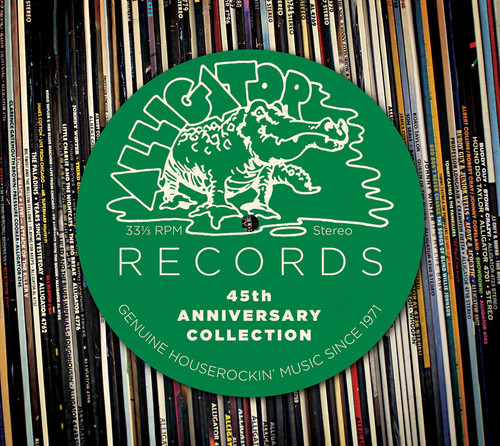 Back in 1971, 23-year-old blues fanatic Bruce Iglauer was frustrated and motivated. As a shipping clerk for Bob Koester’s Chicago-based Delmark Records, Iglauer wanted the label to release an album by his favorite band, Hound Dog Taylor & The HouseRockers. Koester just wasn’t interested, so Iglauer gathered up what little money he had and decided to do it himself. Recorded live in the studio in just two nights during the spring of 1971, the recordings captured the band at the height of its powers. Hound Dog and his HouseRockers simply plugged in and played the same beat-up guitars through the same raggedy amps they used when they played at blue-collar blues clubs like Florence’s Lounge on the South Side. At a cost of $900, Iglauer produced a direct-to-two-track master tape—no overdubs—which he mixed as they went along. With the remainder of his money, he pressed 1000 copies of Hound Dog Taylor & The HouseRockers. And with that, Alligator Records (named after the way Iglauer clicks out rhythm patterns with his teeth when he likes a song) was born. Fast forward 40 years. Today, proudly independent Alligator Records is home to some of the world’s foremost blues and roots rock talent and is regarded by fans and the media alike as the top contemporary blues record label in the world. The Washington Post said, “Alligator is the premiere blues label.” The Chicago Sun-Times added, “Alligator is numero uno among indie blues labels, with artists representing the best in contemporary blues.” Alligator Records celebrates its 45th anniversary in 2016 with the release of The Alligator Records 45th Anniversary Collection. The 2-CD set clearly lays out Iglauer’s wide-ranging blues vision. From the ragged glory of Hound Dog Taylor to the raw Chicago blues of Koko Taylor, Son Seals and Lil’ Ed & The Blues Imperials to the harmonica workouts of Charlie Musselwhite, James Cotton and Rick Estrin to the guitar pyrotechnics of Albert Collins, Johnny Winter, Michael “Iron Man” Burks and Anders Osborne to the front porch roots-rock of JJ Grey & Mofro to the gospel soul of Mavis Staples, the one constant is Alligator’s dedication to releasing what has been dubbed “Genuine Houserockin’ Music.” Everything except for the actual recording happens at Alligator’s international world headquarters, located in an old three-flat on Chicago’s North Side. Staffers —operating with a grass-roots, do-it-yourself ethos that would make any indie rock label proud—reach out across the globe from offices that used to be bedrooms, kitchens and living rooms. Through their tireless work, the 15 dedicated employees (many of whom have been on board over 20 years) carry out major label-level promotional campaigns on a fraction of major-label budgets, achieving results that rival any deep-pocketed corporate record company. With a catalog of almost 300 titles, Alligator Records is the largest independent blues label in the world. Its recordings have received three Grammy awards (as well as a slew of nominations), Indie Awards from the Association For Independent Music (AFIM) and French Grand Prix du Disque awards. Alligator and its artists have won many Living Blues Awards and over 100 Blues Music Awards, the blues community’s highest honor. But even with all of the accolades, Alligator Records never rests on its laurels. According to Iglauer, “Alligator should be the label that’s exposing the next generation of blues artists and bringing their music to the next generation of blues fans. I want the future of the blues and the future of Alligator Records to be one and the same.”